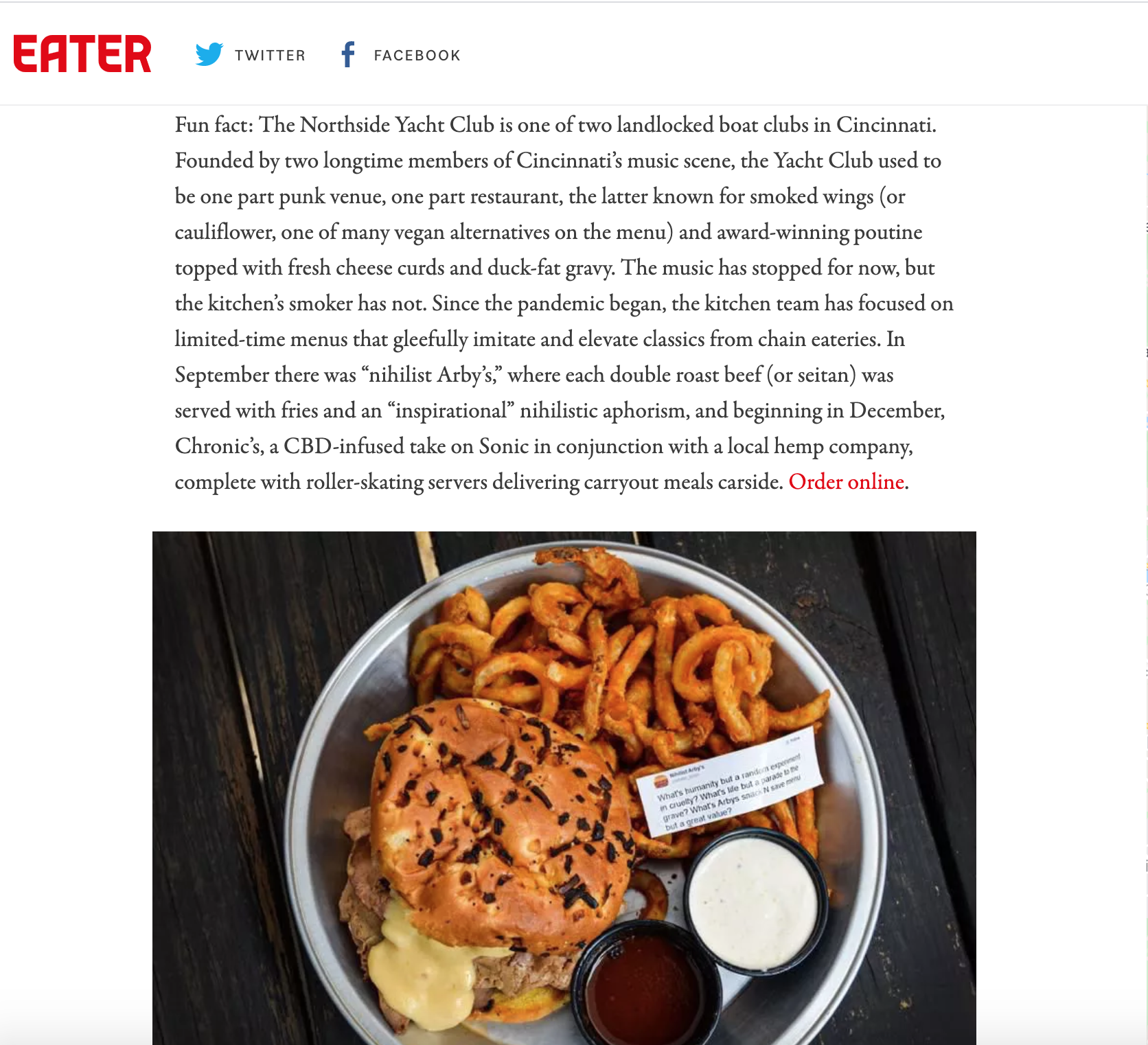 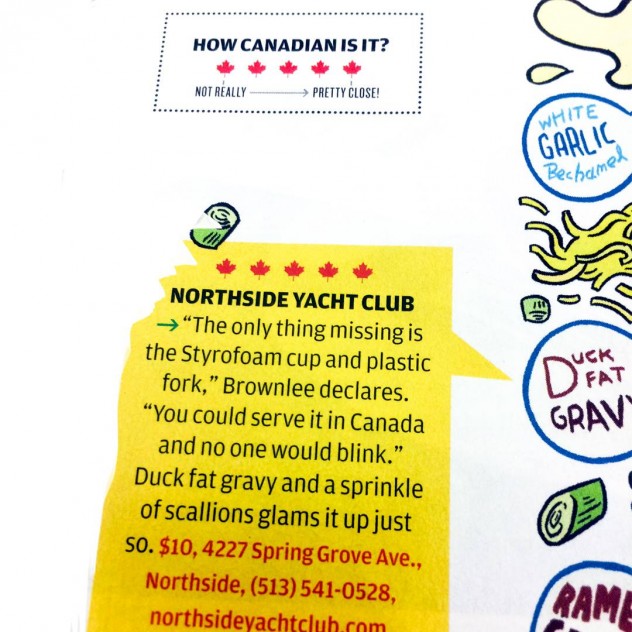 The Bloody Mary is garnished with a slider. And bacon. And a chicken wing.

You don’t have to be young, hip, or a slave to irony to appreciate the Northside Yacht Club. While there’s a conspicuous dearth of actual watercraft, the nautical theme—80 pounds of rope is suspended from the ceiling alone—makes for a cozy watering hole. But owners Jon Weiner and Stuart MacKenzie—both veterans of Wellmann’s Brands—excel in their brunch game. Not a heavy breakfast eater?

The best thing about the new Northside Yacht Club has to be the quality of the drinks. Owners Jon Weiner and Stuart MacKenzie, along with other staffers, have worked with our city’s Queen of Cocktails, Molly Wellmann, and it shows. The well-stocked bar — replete with special glasses and Tiki-drink pottery awaiting the bartender’s mixology magic — is the first thing you see upon entering. You might find little reason to move from one of the bar stools as your evening progresses.Then again, part of the fairly extensive transformation of the old Mayday space includes the addition of an outdoor bar on the back patio, which probably turns out some pretty good libations as well. Bottles of fresh juice mixtures, stacks of fragrant pineapple and bowls of fruit and herbal garnishes are all good signs that these veterans of Wellmann’s Brands will deliver on the drinks front.

Northside Yacht Club is the latest spot to open in the booming Cincy ‘hood of Northside. Is it on the water? No. Once you’ve had their delicious cocktails and amazing food? You won’t care.

Long gone are the days when bars served only cold potato skins and limp french fries.

The Northside Yacht Club is its own breed of bar: tattooed ’tenders concoct craft cocktails with fresh ingredients and a nautical lean (like the Kentucky Surfin’ with bourbon, pinapple, lemon, housemade triple sec and mint); the live music leans a little loud; and the full-service food menu goes gourmet with local ingredients, unique preparations and plenty of vegetarian options. Flanked by smoked wings (amish chicken or the breaded cauliflower vegetarian variety), short-rib grilled cheese and a sesame-ginger tofu bánh mì, the culinary delight that stands out at the NSYC is the poutine.The Québécois french fry and cheese curds dish uses duck fat gravy at night and switches to goetta gravy for Sunday mornings. It’s featured on both the dinner and Sunday brunch menus. “I’m a Canadian citizen and an American one, and I love french fries, cheese and gravy,” says co-owner Stuart Mackenzie. “My dad’s from Canada, and I fell in love with the dish on a family trip with my uncle across the Great White North.” Come for the live music and killer tiki drinks, stay for the gravy fries.

Get a first look inside Northside’s new yacht club:

Veteran Cincinnati barmen and musicians Stuart MacKenzie and Jon Weiner set out in February to open their own nautical-themed bar in Northside, and as of Friday that bar is open to the public, complete with a lifeguard chair.

MacKenzie and Weiner are known in Cincinnati’s music scene for playing in a number of bands. They played together in Cincinnati Royals, while MacKenzie was in DAAP Girls and Lions Rampant and Weiner was in Dopamines.

MacKenzie and Weiner are also veterans of Molly Wellmann’s bars. MacKenzie coordinated marketing and events for Wellmann’s Brands, and Weiner most recently served as general manager of Japp’s Since 1879.

The Northside Yacht Club combines the two of those things with a nautical twist. The bar serves a variety of bourbons, liquors and craft cocktails. Weiner wanted to do a bar with Caribbean-themed drinks, so the current house special is a banana daiquiri.

The venue will host local and national acts and isn’t limiting itself to one genre or style.

With a nautical theme inspired by the 1937 flood, it’s located at 4227 Spring Grove Ave., in the former Mayday space.

Owners Jon Weiner and Stuart MacKenzie, both veterans of Wellmann’s Brands bars, have completely remodeled the space, adding new floors and ceilings, a bar on the outdoor patio and a full-service kitchen.

Three large photo murals in the space show the 1937 flood, when the building that houses the bar (then the Northside Electric Company; hanging Edison bulbs in the bar recall that bit of history) had water up to its second level. Old photos show Northside residents boating around the neighborhood.

“It’s a little nod to the Northside resilience and attitude,” MacKenzie said.

Other nautical nods abound: 80 pounds of nautical rope hang in a weave pattern above the bar. An aquarium holds local river fish. A porthole salvaged from a ship is mounted in the bar.

I was perusing Facebook when I saw a friend post about bartending at Northside Yacht Club (often stylized as NSYC, which awesomely looks like NSYNC). We were hungry and wanted a couple of drinks, so we decided to check out the new bar and grill (and concert venue) in the former Mayday space, which was — once upon a time — the Northside Electric Company, and experienced severe flooding in 1937.

Enter Northside Yacht Club and its quaint, nautical theme, which features a beach scene at its exterior.

Inside, NSYC featured bar seating and booth seating; craft beer and cocktails; great service; and an intriguing (albeit small) menu, with food creations by Ryan Whitcomb, former chef at Nuvo, Dilly Deli, and Local 127. We agreed that the House Cincinnati Chili Cheese Fries sounded great, but we ended up ordering Poutine (fresh cut fries with duck fat gravy, Wisconsin cheese curds, and scallions), House Short Rib Grilled Cheese (86 the arugula), and six House Smoked Wings with cilantro honey lime sauce on the side. To drink, BK got Ballast Point Grapefruit Sculpin (because of course he did) and I got the Banana Daiquiri served in a tiki mug because Labor Day is approaching and I will keep a strangle hold on summer if I have to.

Applebee’s comes to Northside (sort of)